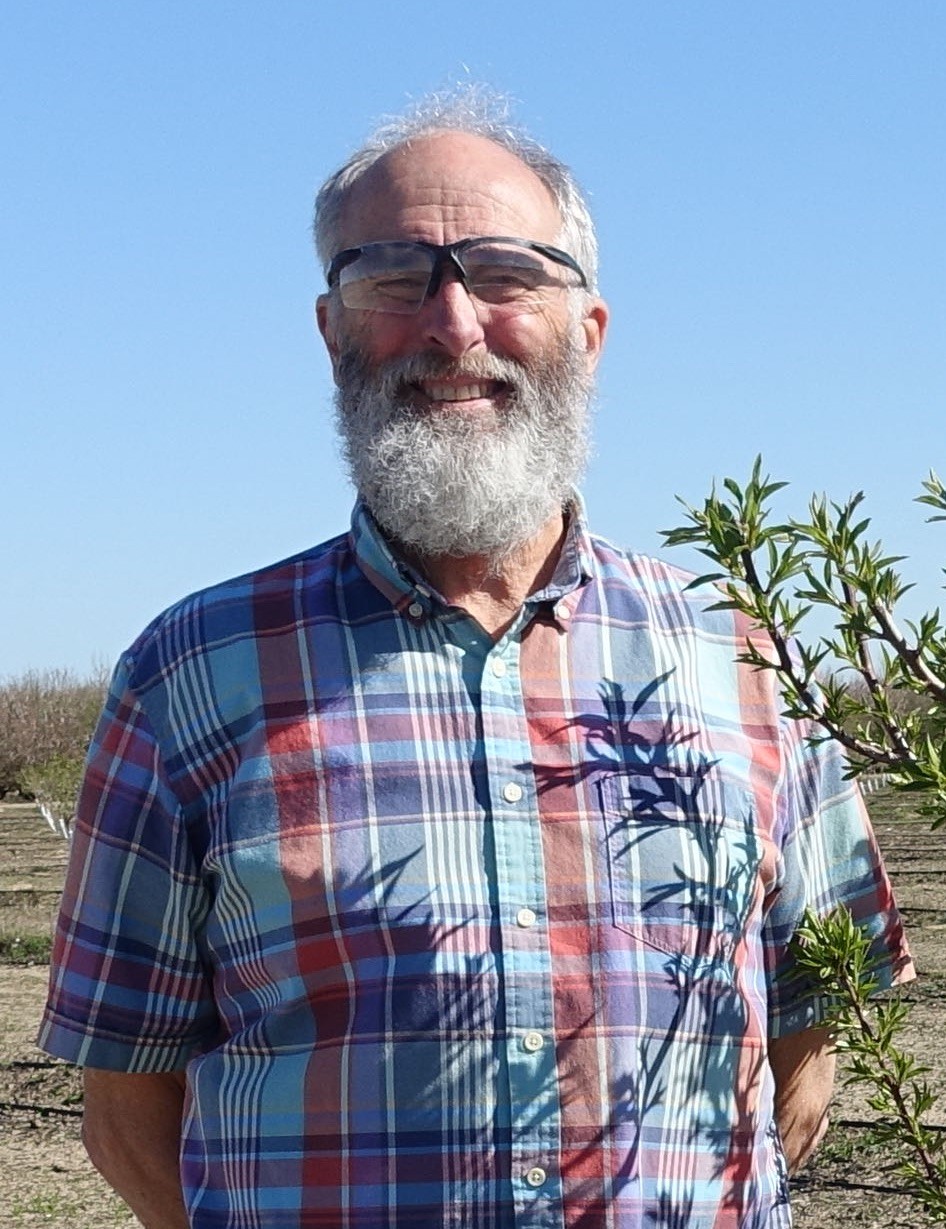 Steve Thorley and his wife Susan grow 160 acres of almonds in Atwater. In Fall 2015, they removed a 30-year-old orchard block that comprised half of their total acreage. After a two-year fallow with Merced rye, they replanted a new Nonpareil / Monterey orchard in January 2018. The young trees are thriving so far, with robust trunks, no sign of disease, and near-zero mortality.

Thorley Orchards is 160 acres of prime farmland on Hilmar sand near the Merced river. The Thorley family started farming almonds on this land in 1965, and Steve and his wife Susan took over several decades ago. Though his acreage is not certified organic, Thorley says “I try to work with natural processes as much as possible,” and he has long been interested in finding restorative solutions to orchard management goals.

Last time he replaced an orchard, in 2007, Thorley wanted to try putting the wood chips back into the ground. But the practice was almost unheard-of at the time. The orchard removal company was “adamant that wasn’t going to happen,” Thorley recalls, and instead the chips were sold to a cogen plant. Nevertheless, patches of chips were inadvertently left on the ground where the piles had been. Thorley noticed that these chip piles created a natural experiment: over the long term, the replanted trees actually grew better in the spots where wood chips had been.

“The empirical results made me see it wasn’t a problem,” Thorley says. So when the other half of his 160 acres came due for replacement eight years later, in 2015, the choice was clear: it was time to try orchard recycling.

The old orchard was ground up right after harvest in 2015, and the additional cost for spreading the chips was about $150 per acre. Thorley immediately followed the spreading with deep ripping (24” to 40” deep) and discing. He then seeded with Merced rye as a cover crop. A one-year fallow was always part of the plan: “The land had been in trees for 30 years,” Thorley says. “I felt it needed a rest.”

The one-year fallow (in 2016) got extended to a two-year fallow (in 2017) because of ongoing drought and low almond prices. Thorley acknowledges that a two-year fallow wouldn’t be the right decision for everyone, but he is glad to have waited. In the meantime, the Merced rye was sold as a hay crop to provide a small cash flow. Finally, in Fall 2017, orchard land preparation was completed (without fumigation), and in early 2018, the 80-acre block was machine-planted with Nonpareil and Monterey trees on Nemaguard rootstock.

Thorley was well aware of the need for extra nitrogen after orchard recycling, even with a fallow in between. In the replant orchard’s first year, 2018, he applied 40 units per acre: “Quite a bit for new trees,” he says. He chose to use calcium nitrate because it is quickly picked up by the trees, but he wanted to avoid overly-fast growth that weakens trees and creates the need for staking. So he applied the fertilizer very gradually, via the double-line drip irrigation system, and ended up only having to stake about 200 out of 10,000 trees. (First-year mortality was only about 50 out of 10,000.)

In 2019, Thorley will probably add less total nitrogen than in 2018, in part because the trees now have larger root areas to intercept the fertigation. He may switch back to a urea-based formula (slower-acting, but he expects that not to matter, because the trees’ nitrogen needs are somewhat less urgent now).

“The results have been excellent,” Thorley says. “Look at the trunks; they look like two- to three-year-old trees.” (They were planted just over a year ago). Some wood chips are still visible on the orchard surface, and most of the wood chips still have a firm texture rather than being crumbly and decomposed. But the trees don’t seem to mind. “I’ve been very proud and feeling very blessed,” Thorley says. “The growth response has been better than any I’ve seen.”

Thorley chose not to fumigate the block before planting in 2018. He’d already had the soil tested for plant-parasitic nematodes and got very low counts, so he wasn’t concerned about that. Some trees in his adjacent orchard have band canker, but the recycled orchard did not seem to have this issue, and the new orchard is all clear so far.

Thorley didn’t notice any interference of the woodchips with the planting process, although there were some places where the chips were not evenly spread, and he would prefer to achieve a more uniform distribution next time. There have also been some ongoing problems with the Merced rye cover crop re-emerging as weeds. He is not sure he would use Merced rye for this purpose in the future. “It’s hard to get rid of it,” Thorley says.

His only other regret at this point is not arranging to formally quantify the effects of orchard recycling on tree growth and soil properties. “Looking at the growth, I’m really impressed,” he says. “I sort of wish we’d had a study done.” He is curious to see the long-term results come in from other orchard recycling trials around the San Joaquin Valley.

Thorley says that when he first tried orchard recycling in 2015, “It would have been perfect to talk to someone who’d already done it, but I couldn’t find anyone.” He still doesn’t know any other growers in his area who have tried the practice. But he hopes and expects to see it become more widespread in the future. “It worked for me,” he says, “and if you have the desire to do it, then go for it.”

For him, the intangible environmental benefits are an important motivator. He is glad to know that the massive amount of carbon taken up by his 30-year-old orchard is still on his land and is creating better soil conditions for the next generation of trees, rather than being released back into the atmosphere by burning. It’s impossible to control all the variables in farming, he says, but you have to control what you can, starting with the soil: “If you’re not good to the land, how can it be good to you?”