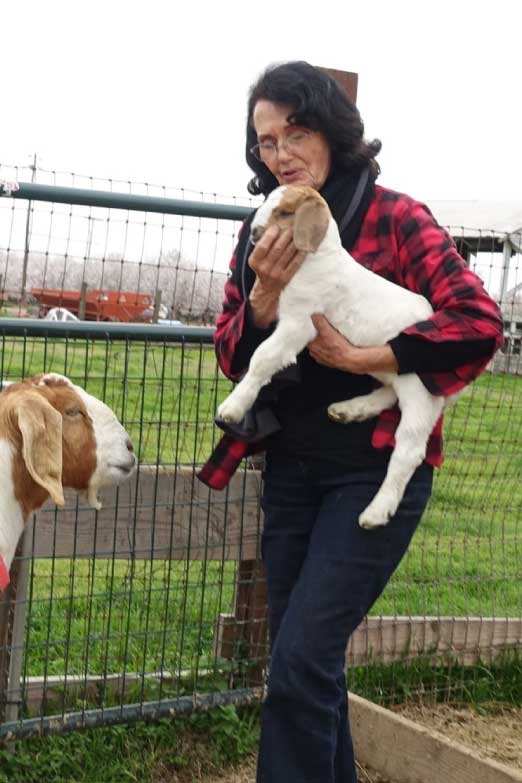 Norma Stretch has been in the almond business since the 1970s. She has a 305-acre almond ranch in Madera, and she recycled an orchard for the first time in Fall 2016. After giving the 30-acre block a one-year fallow (during which she applied microbial supplements and surface irrigation), she is very happy with the growth and vigor of the Nonpareil / Monterey trees at second leaf. Orchard recycling will be her standard practice going forward.

The Stretch family has farmed almonds in Madera County for many decades. Norma Stretch’s late husband, Robert Stretch, was an early advocate of soil-building practices such as fallowing with grass crops in between orchard plantings. The family also has a long-standing practice of adding microbial supplements during the fallow to help clear out plant pathogens, nematodes, and herbicide residues. Now, Norma Stretch has added another tool to her soil health toolkit: orchard recycling.

When it was time to take out an old 30-acre almond orchard in Fall 2016, Stretch was planning to sell the wood chips to a biomass power plant as she had done in the past. But, having just heard about whole-orchard recycling from UC Cooperative Extension Farm Advisor Brent Holtz, she decided to give it a try. There was a higher price tag: $950 per acre for pushing, grinding, and spreading, whereas cogen would only have cost $500 per acre. But whole-orchard recycling had a logical appeal for her. “After all the time that we fertilized those trees,” she says, “rather than shifting those nutrients off the ranch, we can put them back in the soil.”

It was fortunate that Stretch was already planning to do a one-year fallow, because although her old orchard was taken out shortly after harvest in Fall 2016, the horizontal grinder didn’t show up until February 2017, and the chips didn’t get spread until March 2017. This would have made a same-year bareroot planting difficult, if not impossible.

Once the chips were spread, Stretch organized the rest of the land preparation herself. First, she applied a small amount of fertilizer and supplements to the wood chips to help them break down: UN32, 10-34-0 (ammonium polyphosphate), and a biological supplement (a proprietary mix of beneficial microbes, and a molasses-based food source for the microbes). Then she hired a contractor with a large-diameter disc (not a stubble disc) to make two passes to incorporate the chips.

Once the chips were buried, late spring rain and some flood irrigation from the old irrigation system helped to kick-start the decomposition process. In July 2017, once the ground was fully dry, Stretch did deep ripping, followed by another round of discing, surface irrigation, more discing, and scraping. (She has found that pre-plant fumigation is unnecessary on most parts of her land after a one-year fallow, and this block was no exception.) Finally, rows were marked in November 2017, and the new trees went in the ground in January 2018.

Stretch noticed that wherever the wood chips had been spread most thickly, the new trees (bareroot Nonpareil / Monterey) had the slowest growth. The wood chips even suppressed weed growth: in the part of the orchard with the thickest chips, “it looked like that 10 acres had been nuked.” The question was, how much extra nitrogen was needed to overcome stunting?

Stretch aims to supply her young trees with nitrogen judiciously, in order to avoid weak, fast growth. Her typical fertigation recipe for first-year orchards is 7 units of nitrogen per acre per year (in the form of CN9). If that sounds low, it’s because Stretch places the fan-jet microsprinklers only 12” away from each tree for the first year – adding to labor costs, but ensuring that the young trees intercept most of the nitrogen that is applied (instead of the 20% utilization rate that is more typical for first-year orchards).

After seeing some initially slow growth in the recycled orchard in spring 2018, especially in the 10 acres that had received extra chips, Stretch realized it was time to “crank it up a notch.” Starting in early May, she delivered extra fertigation every three weeks, bringing the recycled orchard to a total of 17 units of nitrogen by the end of the growing season. She consulted with UCCE advisor Brent Holtz during the process: “Everything he told me was right on target,” she says.

Stretch is very pleased with the size and vigor of her second-leaf trees. “My orchard was just textbook,” she says. Despite the slow initial growth, her trees have caught up to and surpassed expectations. She is not sure whether additional N beyond the standard amount will be necessary in the second year; she is taking a wait-and-see approach. In the meantime, she is planning to do some additional discing in between rows for weed control and to help incorporate any remaining chips. She has noticed that the buried chips decompose much faster than the chips on the surface.

Stretch is positive about her experience overall and is planning to do WOR next time she removes an orchard (a 23-year-old Butte/Padre block that is due to come out in Fall 2020.) However, there are a few things she will do differently next time.

Next time, Stretch hopes to get the chips spread sooner, so that it will be possible to deep rip before the winter rains start. It wasn’t possible this time due to equipment delays. She will also consider making the chips smaller next time (perhaps a 2-inch instead of a 4-inch screen). And she will aim to start applying extra nitrogen sooner – probably in March instead of May.

One thing she won’t change is the planned fallow between recycling and replanting the orchard. “I think one-and-a-half years of rest helped,” she says. She is also glad that she kept all the wood chips, even though the orchard removal company advised against it on the grounds that her old orchard had at least 50% more biomass per acre than an average orchard. “It was a struggle there for awhile,” she said, “but any time you can put organic matter back into the soil, it gives you so much more life.”

Stretch would definitely recommend WOR to any grower who wants to invest in the long-term health of their soil. “There’s a few stumbling blocks along the way, but you can overcome them,” she says. One of the most important things to get right, in her opinion, is meeting the increased nitrogen demand the first year after replanting.

Next time Stretch recycles an orchard, she’s planning to look into the reimbursement program from the San Joaquin Valley Air Pollution Control District. That still doesn’t necessarily mean that orchard recycling will be the cheapest option upfront, but “since this is a crop you have for 25 years, you spend a lot of money to do it right,” Stretch says. “It was a more expensive option that I chose because it just makes sense.”