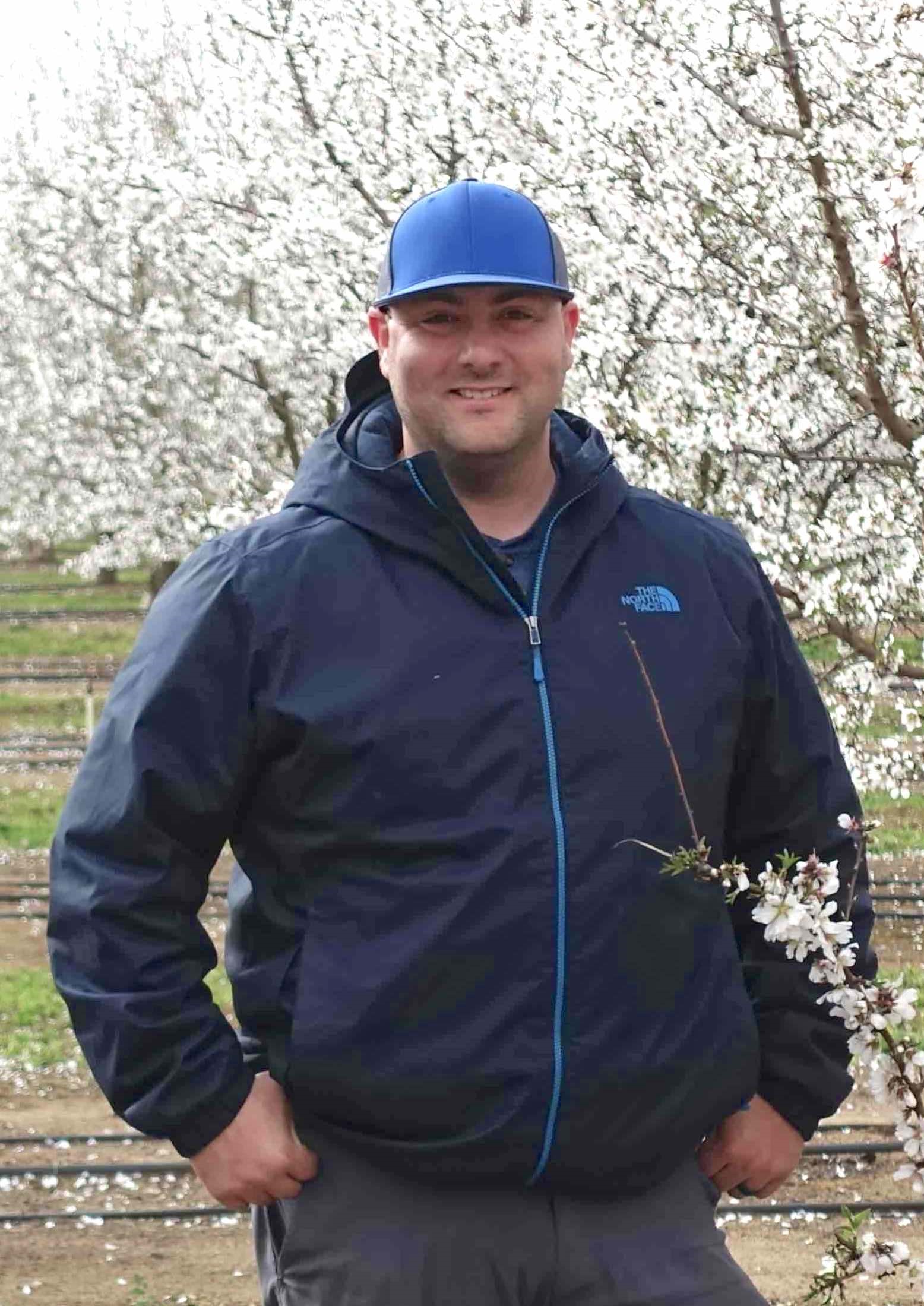 Mike Amaral is a new farmer who joined his father-in-law’s family business, Real Ranch Almonds, last year. Their ranch in Denair is a few hundred acres, most of which will need to be replanted within the next five to six years. In Fall 2018, they tried whole-orchard recycling for the first time (on a 92-acre block). Almost everything went according to plan, and assuming the replant orchard thrives in its first several years, Amaral expects to be doing a lot more recycling in the future.

The orchards at Real Ranch Almonds are situated on the sandy loam soils that characterize most of the upper San Joaquin Valley. Though these soils have many advantages, water-holding capacity is not one of them. Mike Amaral and his father-in-law had heard about whole-orchard recycling via trade magazines and crop advisors, and they decided it was worth a try to see if adding organic matter could improve the physical properties of their Rocklin sandy loam. Since most of their orchard blocks are due to be replaced between now and 2022, there was no time like the present to see if whole-orchard recycling worked for them.

Amaral had some unanswered questions about the process, including whether the chips would make land preparation more difficult and how fast they would decompose. He also wondered if the recycled biomass could spread disease or encourage nematodes. However, once Amaral and his father-in-law understood the procedure and had heard about some encouraging evidence of yield benefits, they decided to go all-in on their 92-acre recycling project.

“Originally we were just going to spread 50% of the chips, not 100%,” Amaral explains; that is what his father-in-law had opted for. But due to equipment problems, there was going to be an unexpectedly long delay in removing the other half of the chips – so they just decided to keep and spread it all. This amounted to a 3- to 4-inch deep layer of chips across the entire 92 acres. Fortunately, the spreaders did a good job and the chips were evenly distributed.

To incorporate the chips, Fowler Brothers deep-ripped twice with a 6-foot shank with paths at 45° angles, disked twice, and floated. This is their standard method, and it was able to cope with even this unusually large amount of chips. Most of the chips are no longer visible at the soil surface, as shown in photos from the orchard three weeks post-planting.

A deep trench, dug for an irrigation main in the new orchard, gave Amaral a cross-sectional view of how well the chips were incorporated. Despite the 6-foot deep ripping, no chips could be seen at or near 6 feet deep. A few chips could be found 2 to 3 feet deep, but most chips were concentrated in the top 12 inches. Currently, there is no best practice guidance available for the optimum depth profile of wood chip incorporation. The depth profile seen in Amaral’s new orchard is not unusual; future research will help determine if it is optimal.

Once the irrigation is installed, Amaral’s next task is to devise a fertilization regime for the new orchard. He knows that adding extra N in the first year of a recycled orchard is essential, but as for the exact amount, “we’re still figuring that out,” he says.

As of late March, seven to eight weeks post-planting, the new trees are showing good growth, but Amaral would like to finish out the growing season before declaring it a success. So far, all signs are positive. Land preparation, fumigation, and planting all went without a hitch, and the chips haven’t provided any obstacle to working the soil.

Even so, Amaral isn’t yet sure whether the last-minute decision to keep the entire 4-inch depth of wood chips was the right one. “What is too thick and what is too thin?” he wonders. He hopes there will be more guidance on optimal wood chip application rates before he does this next time.

Amaral has also been considering the drawbacks involved in taking an orchard out in October and trying to replant it in January. This time, the quick turnaround was a success. Will it work as well for the next block in Fall 2020? He hopes so, because he doesn’t want to wait a year to replant. Especially with so many blocks due to come out simultaneously, time is of the essence.

Would Amaral recommend orchard recycling to his neighbors? “So far, yes,” he says. “We will know more in a year or two.” He has followed the research on whole-orchard recycling and hopes to ultimately see a yield increase of up to a few hundred kernel-pounds per acre per year – enough to pay for the higher upfront land preparation costs.

Seeing is believing, of course, and it’s hard to think about using a new practice until you’ve seen it in action. Attending local WOR field days helped build Amaral’s own interest and confidence in the idea. More information on new research results will be helpful, but most of all, Amaral says, “Growers want to hear from other growers who have tried whole-orchard recycling.”