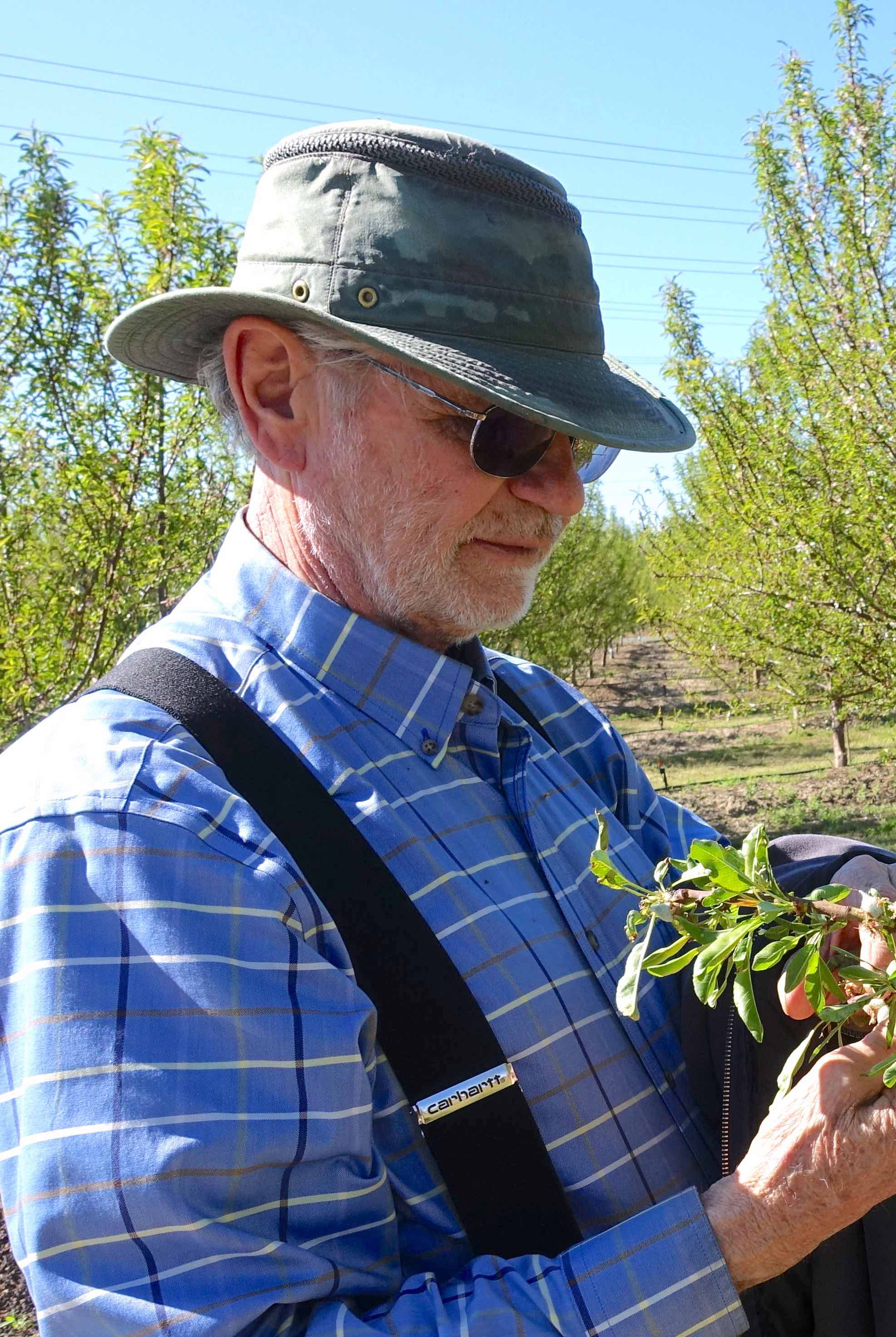 Carl Kruppa has experimented with several different ways to add organic matter to his sandy soil, including shredding orchard prunings and composting huller/sheller trash. He first tried whole-orchard recycling in 2012 and now does it every time he needs to replace an orchard block. He finds that selling half the biomass for firewood and recycling the other half makes land preparation easier and reduces N demand. He also intercrops and does crop rotation with sweet potatoes to help optimize resource use and reduce pest and disease pressure.

Carl Kruppa isn’t afraid to do things a little differently. For many years, he has integrated his almond trees with sweet potatoes: he uses sweet potatoes as an intercrop planting between young trees, and he sometimes practices a two-year-crop rotation of sweet potatoes between one almond orchard and another. Kruppa also has a long-standing practice of accepting trash from a nearby almond huller/sheller and composting it in large piles with poultry manure, then applying the compost to his orchard. So it is not surprising that he was an early adopter of whole-orchard recycling, first trying the practice in 2012 and repeating it almost every year since.

“We’re trying to build our sandy soil up,” he says, “trying to create a better environment for the crops.” His acreage is all coarse-textured soil (Atwater sandy loam and Delhi sand) a few miles from the Merced River. “The sand eats up the chips quickly,” he says, apparently with no ill effects on the orchard – quite the opposite, in fact. The upfront cost is a little higher than burning, but Kruppa expects it to pay off in the long run.

Each time Kruppa has recycled an orchard, he has sold the large-diameter logs for firewood through a broker. The salable firewood represents about half of the total orchard biomass, and the other half (comprised of branches, twigs, and stumps) is kept and recycled. This is why Kruppa ends up applying 15-20 tons per acre of chips, instead of the 30-40 tons per acre that is more typical.

Kruppa owns his own horizontal grinder and dairy manure spreader, which makes the timing of orchard removal more under his control. He prefers to use a smaller chip size (with about a 2” screen; see photo) for faster decomposition. After spreading the chips, he deep-rips to 30” in one or two directions, then discs twice (the second time with fertilizer). Next is spot or strip fumigation with Telone. Then the field is ready for planting, whether with just sweet potatoes (if doing crop rotation) or with almond trees.

Before Kruppa started doing whole-orchard recycling, he did in-row shredding of prunings. He observed that a large amount of shredded biomass would harm tree growth the first year, have a neutral effect the second year, and start to become beneficial by the third year. He saw a very similar pattern when growing row crops on spots where wood chip piles had been. This allowed him to reach his own conclusion that some extra nitrogen is necessary during whole-orchard recycling for optimal growth.

In young recycled almond orchards with sweet potato intercrops (which is his standard practice for the first year of a new orchard), Kruppa doesn’t find it necessary to worry too much about the trees’ nitrogen demand, because there is plenty of N left over from what is applied to the potatoes. Otherwise, he says, “It takes 35 to 100 units [lbs] of N per acre to help digest the chips.” He adds that the first fertilization should be done earlier than usual in a recycled orchard, so that the tail end of the winter rains can keep the soil moist and hasten decomposition.

How the replant orchards are doing so far

In his six years of experience with orchard recycling, Kruppa hasn’t observed any negative effects of orchard recycling on land preparation, pests and diseases, or tree health. “The chips disappear after one full season,” he says. “You could hunt and find some chips later than that, but they’re mostly gone.”

He does not claim that orchard recycling is an obvious yield booster, at least not yet, anyway. “I have gotten some harvests out of the block that was redone in 2013,” he says. “The harvests were in 2016, 2017, and 2018. The first harvest was lighter than expected, but there could have been some other issues affecting it.”

Kruppa has had some bad luck in several of his other recycled orchards, too. Two of his youngest recycled blocks, both planted in Independence (in 2016 and 2017), are located in a low spot near the Merced River. They tend to get hit hard by frosts, including a recent brutal frost on 2/23/2019 when the temperature dropped to 24°F. As of a few weeks later, the third-leaf trees had almost no fruit set and were suffering from bacterial blossom blast on their frost-damaged leaves. Kruppa expects they will fully recover, but the fourth-leaf Independence block may not be worth harvesting this year.

Kruppa is satisfied with his approach of only keeping half of the biomass from the old orchard (15-20 tons per acre instead of 30-40 tons per acre). “If it’s real thick, it can be a challenge to incorporate, especially if you’re using smaller equipment,” he says. “And then it has a hard draw on the soil nutrient availability. Quite often, the crops you put in behind it suffer because the nutrients get tied up with the organic matter.”

Although Kruppa has been working for six years to fine-tune his orchard recycling process, he still has more questions than answers: How much additional fertilizer is optimal the first year? Is it better to incorporate the chips deeply or shallowly? What is the long-term nutrient value of the incorporated material? “We’re learning and moving forward,” he says.

Kruppa agrees that orchard recycling is not always an easy sell. “It’s not an accepted practice yet,” he says. “The biggest challenge is how costly it is.” But now that burning is more difficult and expensive than it used to be, orchard recycling looks better by comparison.

He would definitely recommend the practice to other growers, but he warns, “Be careful, because it might hurt your tree growth if you don’t meet the increased nutrient demand.” He believes that problem can be readily managed with some advance planning. And he is excited to be on the forefront of what he believes to be a new best practice for almond cultivation: “It’s good for the environment, good for the soil,” he says. “I think we’re on the cusp of something special.”